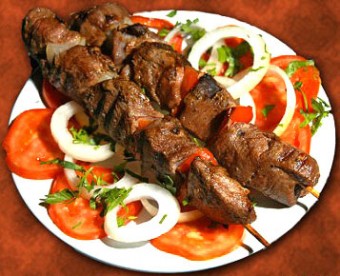 Turkish kebab cuisine is really more than döner in pita, and the crap they sell in Germany at every corner is a disgrace for Turkish Kebab s. Turkish Kebab is a world of flavours where meat meats vegetables and spices, now that Turkish cuisine and kebab get more popular in America and Asia.

Turkish kebabs are popular more than ever with many people across North America and the Middle East, according to a study conducted by a Turkish restaurant.

The kebab is such an important food in Turkish cuisine that there are kebab restaurants in almost every neighborhood. The best known foods of Turkish cuisine, the kebab, döner and pide (Turkish pizza), lahmacun (thin Turkish Pizza) continue to draw interest from around the globe. Turkish kebabs, with their variety of ingredients, as well as the varied types of pide, top the list of ‘must-eat foods’ for tourists traveling to Turkey. In Germany at every corner they sell döner kebab in pita but beware .. it is mostly crap and real Turkish kebab cuisine offers so much better and delicous.

The growing popularity of Turkish cuisine has caused some restaurant companies to consider opening new branches abroad, after determining the food demands of various places.

According to Atilla Külekçioğlu, chairman of the executive board for a company in 35 locations in Turkey, the kebab is such an important food in Turkish cuisine that there are kebab restaurants in almost every neighborhood. His company aims to have 50 branches by the end of 2012.

World-famous Turkish dishes should be available everywhere, in order to fight against the many foreign, fast food restaurants opening, Külekçioğlu said. ‘ For good business you have to show your quality and provide trust. You have show where the meat originates. We have established a production facility. People trust us,’ he exclaimed with pride. The number of fast food franchises in Turkey has reached 9,000, according to Külekçioğlu. He mentioned the fast food sector had a $1.5 billion turnover in 2011 and was expected to reach $1.8 billion this year.

Some Turkish companies, like Külekçioğlu’s, have been conducting studies in order to facilitate opening new restaurant locations abroad. ‘ We’re in talks with global firms. We plan to open new branches in the Middle East and North America first. Our studies show there is a lot of interest in kebabs there. We also have business talks for a branch in Moscow. Russia is a very important market. There are restaurants there already, but we want to enter this market as a chain,’ he said. “Turkish cuisine leaves many countries behind even with its kebab, pide and meatball. We have more dishes than are found in French and Italian cuisine and we want to show them to the world.”

A kebab restaurant made headlines in a Russian newspaper a few weeks ago, Külekçioğlu said. “The owner says in the headline ‘I got the turnover that I targeted for a year in only one month.’ Russians adoreTurkish food. The story shows us that they need more.”

Beyti Kebab – Ground lamb or beef, seasoned and grilled on a skewer, often served wrapped in lavash and topped with tomato sauce and yogurt, traced back to the famous kebab house Beyti in Istanbul and particularly popular in Turkey’s larger cities.

Buğu Kebabı , ‘ Steamed Kebap’ – Cooked in low heat until the meat releases its moisture and reabsorbs it.

Cağ kebabı , ‘ Spoke Kebab ‘ – Cubes of lamb roasted first on a cağ (a horizontal rotating spit) and then on a skewer, a specialty of Erzurum region with recently rising popularity.

Çöp şiş , ‘ small skewer kebab ‘ – a specialty of Selçuk and Germencik near Ephesus, pounded boneless meat with tomatoes and garlic marinated with black pepper, thyme and oil on wooden skewers.

İskender kebap – döner kebap served with yogurt, tomato sauce and butter, originated in Bursa. The kebab was invented by İskender

İslim kebabı , ‘steamed kebab’ – Another version of the aubergine kebab without its skin, marinated in sunflower oil.

Köfte kebap or Shish köfte – minced lamb meatballs with herbs, often including parsley and mint, on a stick, grilled.

Kuyu kebabı , ‘pit kebab’ – Prepared from the goat it is special for Aydın region, similar to tandır kebabı .

Manisa kebabı – This Manisa region version of the kebab is smaller and flat size shish meat on the sliced pide bread, flavored with butter, and stuffed with tomato, garlic and green pepper.

Orman kebabı , ‘forest kebab’ – Lamb meat on the bone and cut in large pieces mixed with carrots, potatoes and peas.

Sivas kebabı – Associated with the Sivas region, similar to Tokat kebab but especially lamb ribs are preferred and it also differs from

Susuz kebap , ‘waterless kebab’ – Cooked after draining excess fluid from the meat rubbed with salt and cinnamon in saucepan.

Tandır kebabı , ‘tandoor kebab’ – Lamb pieces (sometimes a whole lamb) baked in an oven called a tandır , which requires a special way of cooking for hours. Served with bread and raw onions.[1]

Tas kebabı , ‘bowl kebab’ – Stewed kebab in a bowl, beginning with the cooking of the vegetables in butter employing a method called yaga vurmak , (“butter infusion”), before the meat itself is cooked in the same grease.

Testi kebabı , ‘earthenware-jug kebab’ – Ingredients are similar to çömlek kebabı , prepared in a testi instead of a güveç , generally found in Central Anatolia and the Mid-Western Black Sea region.

Tokat kebabı – Associated with the Tokat region, it is made with veal marinated in olive oil, aubergine, tomatoes, potatoes, onion, garlic and special pita bread.

Urfa kebabı – from Urfa, similar to Adana kebab, but not spicy

Generally, pide made with cheese and white meats are consumed in Middle Eastern countries, according to Külekçioğlu. ‘ Turkish Kebabs come first in popularity in North America, but pide is consumed a lot as well. When I say kebabs I mean Adana and Urfa kebabs, as well as shish kebabs. Kebabs are well known in Europe. I lived in Germany for a long time and people in that country love kebabs with eggplant and tomato, as well as Adana kebab. Among the types of pide eaten, mushroom pide is preferred. All of Europe consumes döner and China loves it too. China is a very big region where people are interested in different tastes, since Chinese people eat anything thrown at them, be it dogs or fetus’ Külekçioğlu stated.

‘ There should be a larger number of Turkish food companies abroad,’ he expressed.

Tourism revenues at $4B in Q3 in Turkey