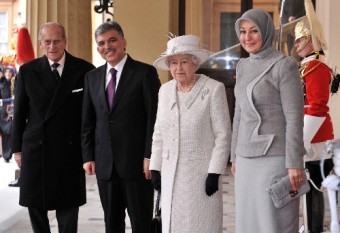 It has been the first visit in presidential level from Turkey to Britain in 23 years. Queen Elizabeth II paid a visit to Turkey in 2008. 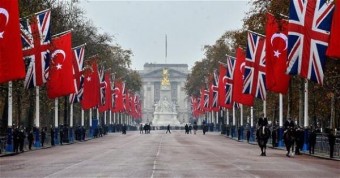 The two heads of state shook hands warmly as the hosts laid on the traditional pomp at the ceremony, which included a 41-gun royal salute and Gül’s inspection of the lines of Coldstream Guards in their grey greatcoats.

Turkish Deputy Prime Minister Ali Babacan and Foreign Minister Ahmet Davutoğlu are accompanying Gül during his visit. It marks the first official visit by a Turkish president to Britain in 23 years. The latest Turkish president to set his foot on British soil was Kenan Evren , the 7th president of Republic of Turkey. The U.K. accepts a maximum of two state visits in one year; the year’s first visit was paid by U.S. President Barack Obama. Queen Elizabeth paid a visit to Turkey in 2008.