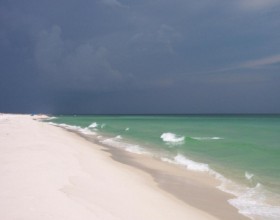 Authorities say they received a call Tuesday afternoon of swimmers tangled in the beach’s strong riptides.

Firefighters found a 46-year-old man on the shore, but CPR couldn’t revive the man.

Lifeguards rescued 11 other swimmers from the rough surf. Reports say the swimmers were not injured.

The two men, whose names have yet been released, were part of a group visiting from Baton Rouge.

Hot-Affiliates Ads
Advertise on this page.

Doctor warns: ‘When you shouldn’t sleep on the plane